All of us have heard of calf jackets. Many of us have seen them in use but only a few of us have actually used them. What are they and what are the pros and cons of their use?

Why would a calf need a Jacket?

The obvious answer is to keep warm in cold weather. But, what’s “cold” to a newborn calf? There is a temperature range where the amount of body heat produced by a calf is balanced by her body heat losses. That range is called “thermoneutral.” 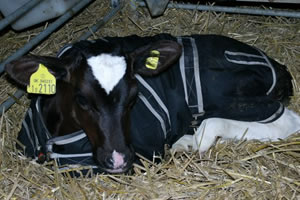 For an eighty-five pound newborn calf this range is about 55 to 78 degrees (assuming she is dry and in a draft-free environment). As temperatures fall below 55 for an extended period of time she has to burn extra energy to maintain her body core temperature.

Ways in which heat escapes from a calf

Now, let’s do a quick review of four ways heat escapes from a calf no matter what the weather.

Evaporation.
Heat from her body is used to evaporate water primarily on her skin and hair coat. This is easy to solve at birth. After her dam licks her off, just finish the drying and fluff up her coat.
But, does her housing during the first month provide a dry place to keep out of rain and snow? A water repellent jacket can keep her dryer.

Conduction.
This is another way heat moves away from a calf. Most calves less than a week old spend ninety percent of their time lying down. But, on what kind of bedding are they lying? Dry wood shavings? Dry straw? Wet bedding?
Direct contact with wet straw results in three times as much heat loss (conduction) as contact with dry wood shavings. A moisture repellent jacket can slow down conduction heat losses through damp bedding.

Radiation.
Losses occur when heat is transferred through the air from a warm object (calf) to a cold one (concrete, snow). These losses are reduced for calves if they can lie down some distance away from the cold object. A jacket can serve as an insulating barrier to reduce heat moving away from the calf’s body.

Convection.
Losses occur when air passes over the calf’s body. On one hand, when the housing is draft-free and a calf can snuggle down into a bed of straw, these losses are minimal.
On the other hand, when the bedding does not allow any hollowed out nest and the pen is wide open for air movement (as in most greenhouse-like structures or pole barns), convection losses can be higher. A jacket can serve to minimize heat loss by radiation that is subsequently carried away by convection.

How do Jackets benefit the calf?

First, the smaller the calf the greater the potential for her to lose body heat. That’s because her ratio of surface to body mass is much greater than for even a 130 pound heifer. These small calves may be the youngest ones or calves with especially low birth weights like twins. Rather than just depending on extra bedding. 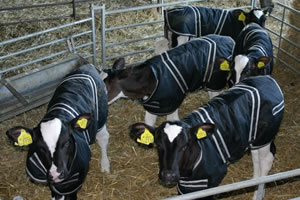 Third, the greater the difference between the calf’s body temperature and the air around her, the greater the potential for benefits from using calf jackets. In very cold weather, North Dakota State University researchers demonstrated an increase of 0.2 pounds average daily gain (1.2# without jackets and 1.4# with jackets from birth to four weeks) using jackets in hutch-housed calves.

The drier and cleaner the jacket, the better it will insulate a calf.
Aim for bedding that keeps jackets relatively clean and dry.
Optimum age range for the use of jackets is from birth – between 4 and 5 weeks. Calves should be well grown and onto concentrates by this stage and have reached the
temperature range of 0 degrees – 25 degrees as explained in the Thermo neutral zone page. Although the jackets can be left on for longer with no ill effects if required. 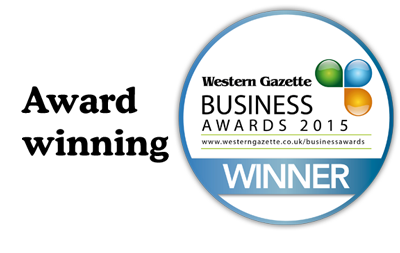